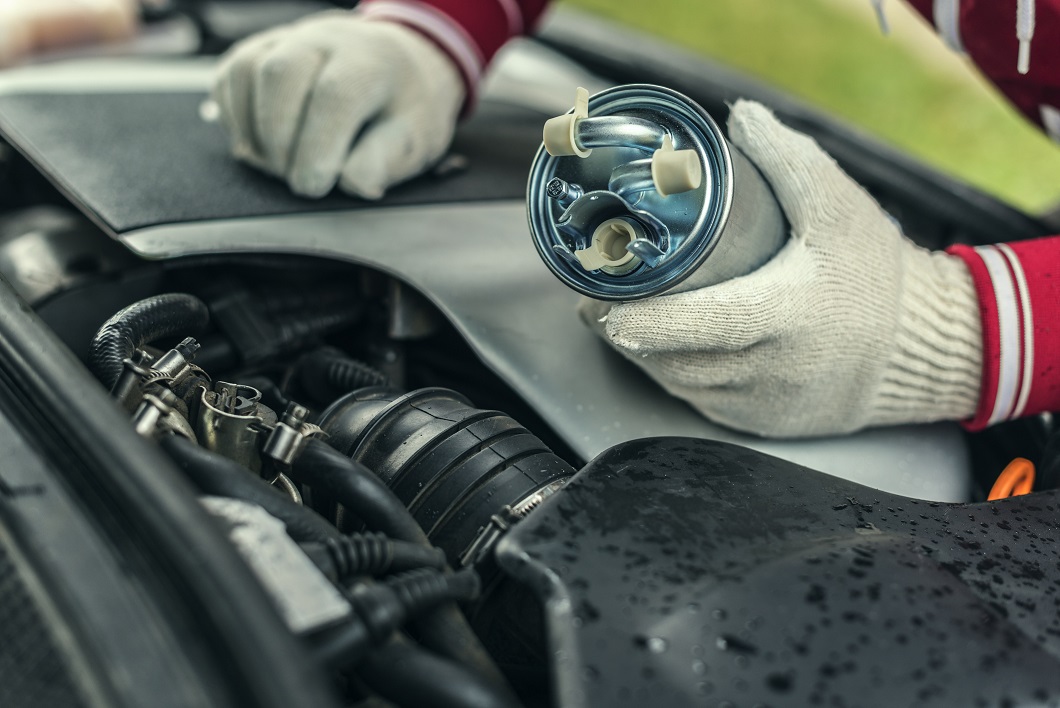 The fuel filter is one of the most neglected running parts in a car.  Meanwhile, the quality of fuel and infrastructure of many petrol stations is far from perfect.  How to diagnose a fuel filter being used up? How often should one replace the filter and what can driving with a dirty filter lead to?

How does the fuel filter work?

The task of a fuel filter is slightly easier than the task of an air filter.  Modern petrol stations do their best to deliver the cleanest possible form and quality of fuel, meeting norms set forth by the European Union.  This does not mean that the fuel is totally with no impurities.  The fuel that we pour into the tank can contain such particles as small metal pieces, particles of rust, sand, organic deposits, clay, mud or other particles which are harmful to the engine.  Some of them may not be visible to the naked eye.  Fuel filters used in petrol engines are to catch particles which are not bigger than 10 μm, and in the case of diesel engines they need to be even more precise – 3 μm. PURRO products meet all those strict norms.

The principle of operation of a filter is simple.  The filter is most often in the form of a closed, tight can, where a corrugated cartridge is enclosed, made of synthetic or cellulose fabric.  Filter stub pipes are connected to two fuel pipes or hoses.  Filter housings may be made of plastic (e.g., transparent) or metal.  Diesel engine cars have mostly the second solution.  The fuel pump is responsible for delivering the fuel from the tank to the injection system.

Each filter has a particular direction of flow for the petrol or diesel fuel, that is why it is important to pay attention to it when fitting a filter on a car.  Models which are used in diesel engines are also equipped with water separators, which collect water from diesel fuel.  In some of them, it is possible to drain collected water, using a special valve with a seal.  There are also other systems applied, such as magnets to catch metal particles, return valves to prevent the reward flow of fuel, fuel heaters and also water content sensors.  PURRO offers all those types of filters and mechanics can easily find a filter for the particular make and model of the car in our product range.

Why to use fuel filters?

Not long ago one could find passenger cars with no fuel filters.  Carburettor took its role, using a built-in filtering sieve.  It was not really efficient, but it was also not so needed, as the fuel system with carburettor had a quite high tolerance of impurities and low quality of fuel.  Possible dirt particles did not influence the work of the engine much, and the quality of exhaust gas or precision of fuel dosage was not so important at that time.  When a carburettor got clogged up, it was enough just to clean it. 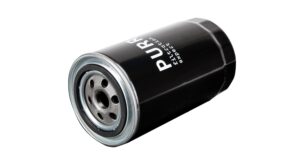 What is the danger of driving with a used-up fuel filter?

A used-up fuel filter can show no symptoms of malfunction for a long time.  The engine then works properly and the change can be not noticeable to the drivers.  The problem appears only then when there is so much dirt in the fuel system or a particle is so big, that it can block the fuel.

If the dirt particle gets to the high-pressure fuel pump or injectors, it can damage them.  Also, pistons, valves and other elements of the engine, where deposits of burnt impurities can be collected might be damaged. Quality of fuel is really important for engines equipped with EGR valves, DPF filters or lambda probes.  Incorrect composition of exhaust gas results in increased deposits which impair the operation of the engine.  It is worth adding that the damaged filter is not able to purify the fuel from water particles, leading to corrosion of engine and fuel system elements.

Where is the fuel filter located?

To find the fuel filter, in most vehicles one must open the hood.  The filter can be found in the engine compartment, next to the engine compartment partition wall, close to MacPherson Strut mount.  Usually, it is attached in an upright position and there are two fuel hoses connected to the filter.  Thanks to such a location, water vapour collecting in the filter can easily flow down to the settler.  In passenger cars, one can also find the fuel filter under the floor of the chassis.  It is connected directly to the fuel pipes.  It is a flow model, which is assembled in a horizontal position, and because of this has no additional tank for collecting water from the system.  One should also keep in mind, that in modern cars, there may be some additional fuel filters.  Often, we can find the pre-fuel filter is usually made of a thick metal grid, located in the fuel tank.  Besides that, the simplest flow filter can be used for catching the biggest fractions.

How often should one replace the fuel filter?

Recommendations of car manufacturers regarding intervals of fuel filter replacement are various.  Some recommend replacement after driving 30 thousand kilometres, others recommend much longer intervals, even up to 120 thousand.  Especially Japanese makes are well known for such long intervals.  So how often should I change a fuel filter? A reasonable mileage is approximately 50 to 70 thousand kilometres.  A good quality fuel filter, meaning every manufactured by PURRO, should with no problem stand such a mileage.  Taking into consideration the fact that the cost of replacement of a fuel filter is relatively low, an earlier replacement will not impair the finances of the vehicle owner.

When should I replace the fuel filter?  Preferably before the Autumn-Winter season.  Low temperature is especially harmful to diesel fuel, having heavy oil fractions that clog up the filter.  Paraffin wax deposits appear in the form of flakes or crystals, which get to the filter.  Additionally, when the temperatures are low, the fuel becomes cloudy and at the bottom of the fuel tank, we can observe the creation of a deposit, which looks like overcooked porridge.  Because of this phenomenon, winter fuels have part of the paraffin-hydrocarbons removed and added ingredients that lower the cold filter plugging point (CFPP).

Symptoms of a used-up filter

One of the first symptoms of a used-up fuel filter is a problem with starting the engine.  This mostly applies to diesel engines, which are much more difficult to start, especially in the winter time.  In many cases, we can also observe black smoke coming out of the muffler, which is a symptom of incorrect fuel-air proportions.  Much more dangerous are the symptoms that present improper operation of the engine.  A clogged fuel filter can impair the reaction of the car on pressing the accelerator pedal, lower the power of the engine and result in uneven work of the engine.  Engine stuttering at high loads can be noticed, e.g., when a car is driving uphill or overtaking other vehicles on the road.  In some situations, the engine can be turned off when idling, e.g., when approaching a crossroad, which in turn results in loss of brakes assistance and power steering operation.  Another symptom which should trigger control of the fuel filter is the scent of engine oil being burnt.  In such a situation it is not worth taking any further risk. We recommend an immediate visit to a garage or a service.  If a mechanic recommends a fuel filter change, it is really worth considering only the best quality products offered by PURRO.

How to care about a fuel filter?

What to do to make the fuel filter work properly and problem-free for a long time?  First and foremost, remember to fill the fuel tank only with good-quality fuel.  The biggest certainty of good quality fuel can be provided by large chains of petrol stations.  Not only do they usually have the most extensive infrastructure, but also fuel rotation in their tanks is the fastest, and thanks to this one can be sure always to have fresh fuel, enriched with appropriate substances.  It is especially important in winter when fuels are added substances preventing deposits of paraffin wax being created in the fuel.  When filling in only in trusted petrol stations, one can also be sure that the fuel has the octane number as declared, which prevents knocking combustion. 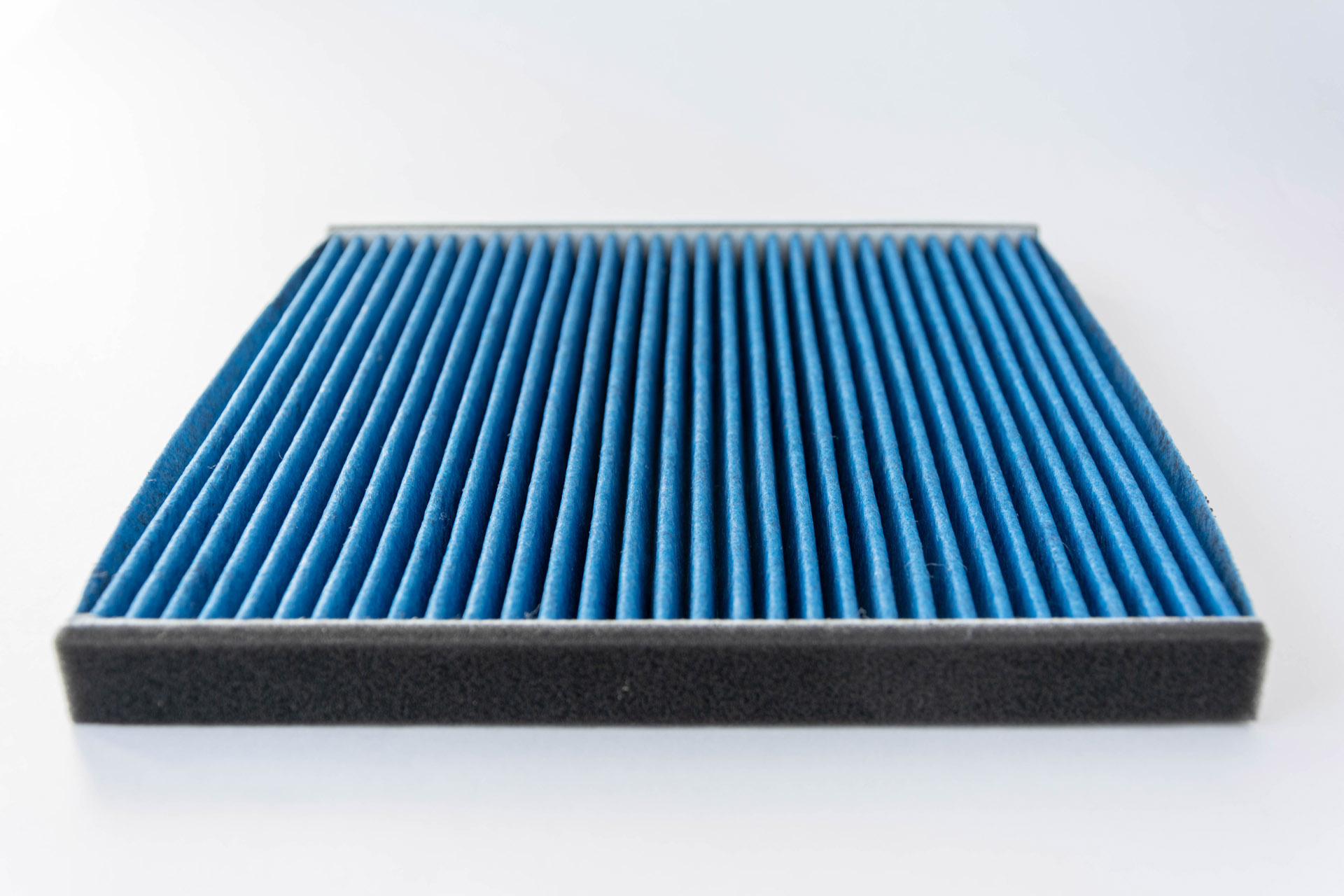 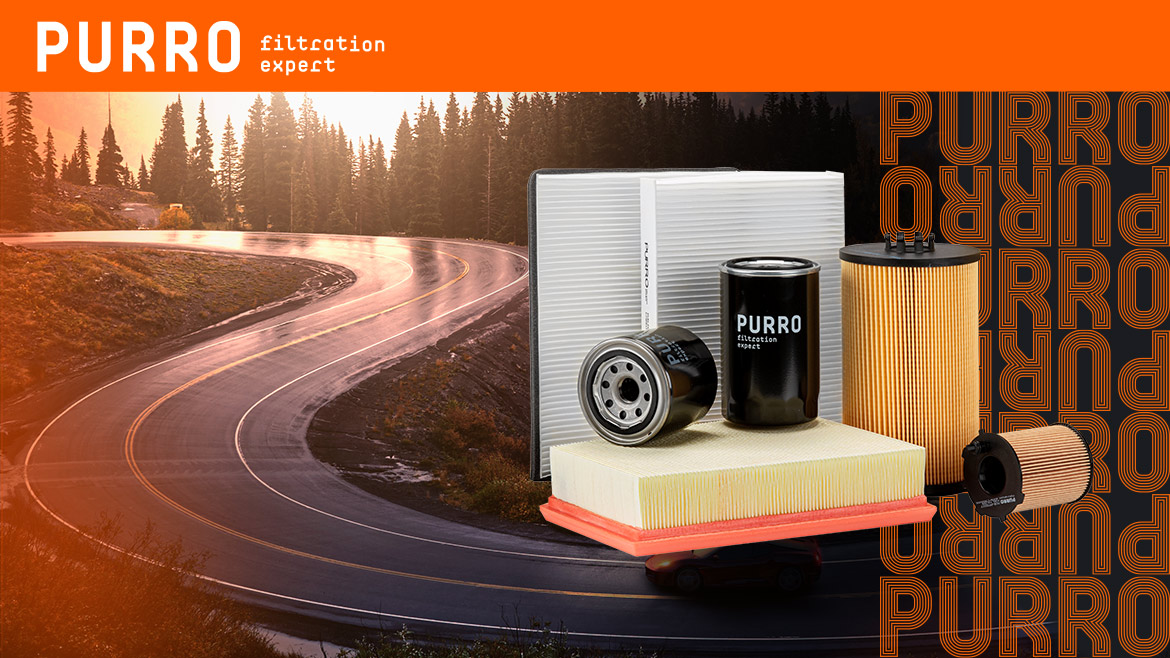 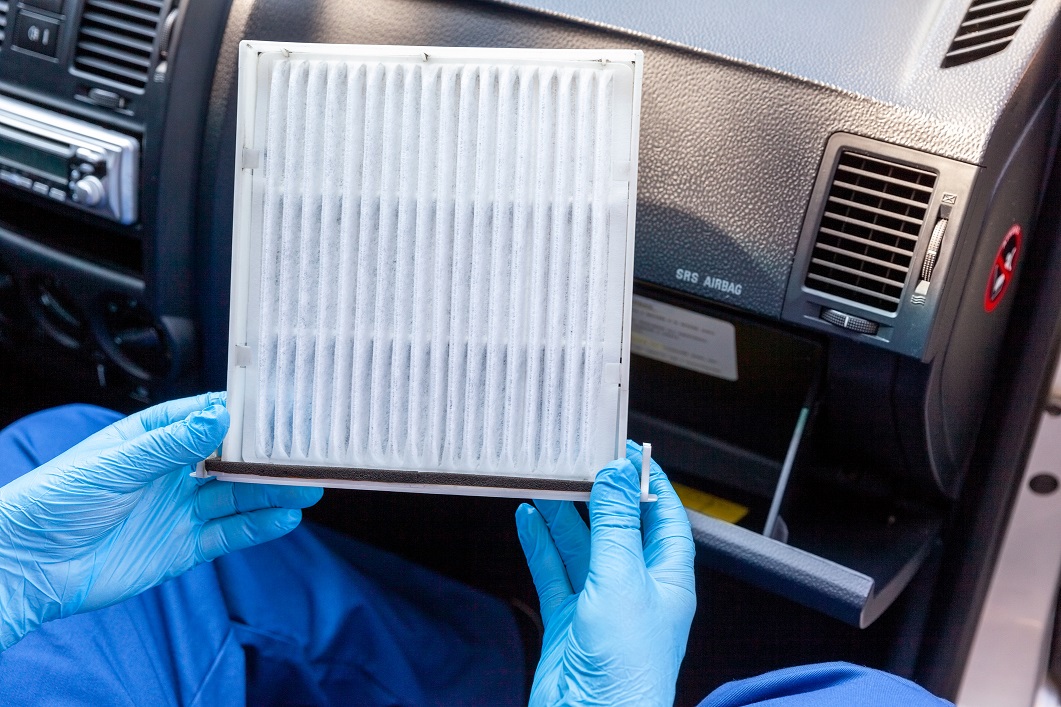 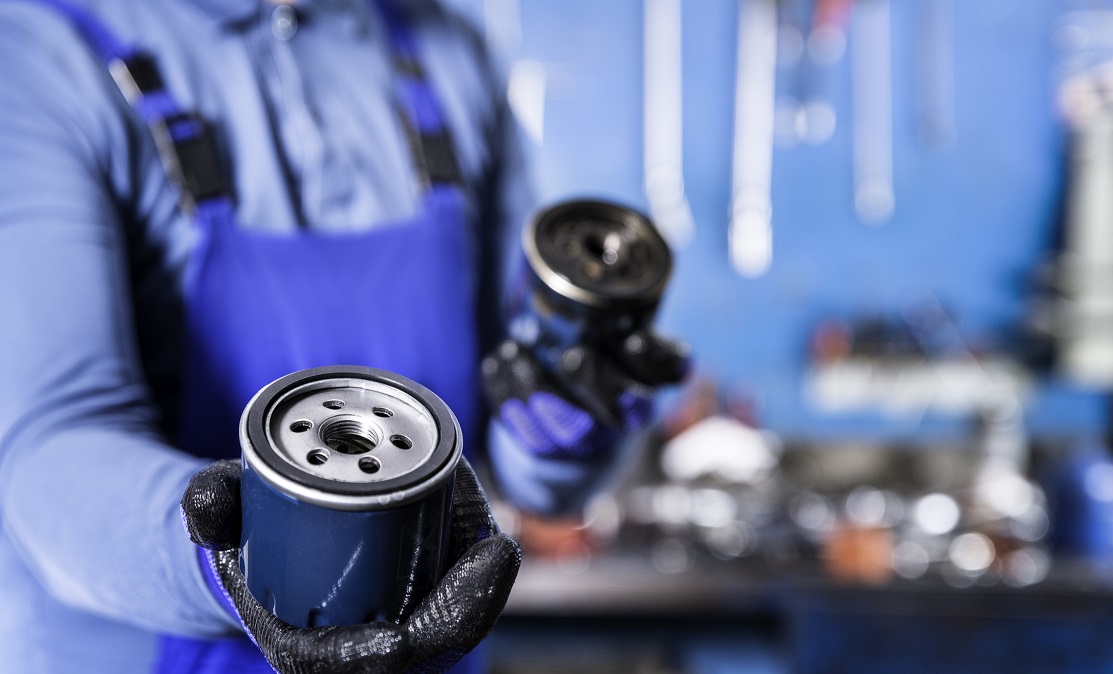